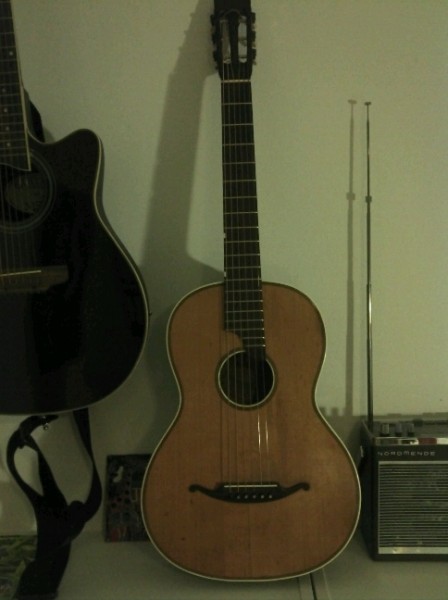 Today’s line-up of my guitars on the wall made me pick up this one from the basement. Fixed an ailing fret on this baby – an old guitar I was given by a previous landlord three four years ago in a very bad state.

I may not be such a good player, but fixing broken stuff is what I am passionate about. And now, since I’ve found a sweet way of putting them on my wall, it would be a sin not to keep it with the other guitars.

It’s an interesting guitar – steel strings on an accoustic guitar with bridge pins. There’s a woodmark on it which says “Philharmonic S 1802”. Is it that old? I don’t think so (I don’t know about guitars, but with violins the date inside is just an indicator of the “type” it was copied from). This one is old thouh, the finish already coming off in a lot of places. And the way I repaired it with my basic tools in 2007 (living out of a suitcase by that time) wasn’t satisfying enough. So I reactivated it today, dismantled it again, fixed the fret, polished it up and then…. well….uhhmmm….took it into the bathroom and gave it a torough bath under the shower! Hahahaha….. seriously, it’s what I should have done with it back in 2007.

I never intended of clustering my wall with guitars or any other stuff, other than a painting on each side of the room (here it neighboured by a painting from Sudanese artist Abusharia Ahmed), but having them ready-to-pick whenever I feel like jaming along a song, is just very convenient.

This website uses cookies to improve your experience while you navigate through the website. Out of these, the cookies that are categorized as necessary are stored on your browser as they are essential for the working of basic functionalities of the website. We also use third-party cookies that help us analyze and understand how you use this website. These cookies will be stored in your browser only with your consent. You also have the option to opt-out of these cookies. But opting out of some of these cookies may affect your browsing experience.
Necessary Always Enabled

Any cookies that may not be particularly necessary for the website to function and is used specifically to collect user personal data via analytics, ads, other embedded contents are termed as non-necessary cookies. It is mandatory to procure user consent prior to running these cookies on your website.