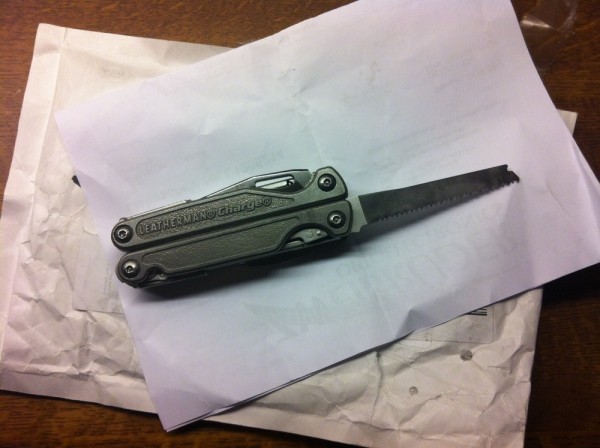 ….and it’s not that I haven’t tried, here’s some experience I’d
like to share because it’s both good and bad at once.

What you see below is my Leatherman Charge TTi. My Charge TTi has some
serious quality issues, which is why I had sent it in to the service
center at Zweibrüder Optoelectronics, the German distributor of
Leatherman multitools. It took them about two weeks to totally screw up this tool. The tool came back with a wobbly saw blade and still tight screws
which prevent me from opening all screw drivers. They were supposed to
repair it, maybe fix new screws and bend the Titantium handles so that
the blades don’t scrap along the handles. None of this happened, but
instead they only made it worse. Much worse, really really bad. They do have a quality control, at least according to the receipt I
received, but they obviously failed at doing a final test. The tool
isn’t usable, or maybe only 60% of it work as intended. Having lost my trust in their service quality, I directly contacted
Leatherman US via their US Facebook page – and instantly received a
reply. Leatherman USA promised me a new Charge TTi, which is something
I never expected and which now makes me really happy in the end. So
it’s a clear win for their social media channels and also for their
understanding of customer service. I just hope this will also
influence the German distributor, because their (hey, German
engineering?!) service quality is the complete opposite of what
Leatherman USA had to offer. I am a loyal fan to this brand and will buy anytime again because
their multitools have already saved me in so many awkward situations.
There’s just this different understanding of service quality in
Germany that urgently needs to change, because otherwise it’s bad for
the brand and the associated marketing channels (Zweibrüder
Optoelectronics also sell the famous LED Lensers, and I am sure they
wouldn’t want to have similar quality issues with their LED lights). @Leatherman US – thank you for the quick fix! @Leatherman Germany – bitte schnellstmöglich den Reparaturservice nach
LM-Leitfaden ausrichten. Mir immer noch unverständlich, wie ihr mir
das tool in diesem – wirklich verschlimmbesserten – Zustand
zurückschicken konntet. Deswegen hatte ich direkt LM USA kontaktiert,
weil das Vertrauen erstmal weg war. Also interesting to see how social media feedback is regarded the norm
in the US (as opposed to Germany).

This website uses cookies to improve your experience while you navigate through the website. Out of these, the cookies that are categorized as necessary are stored on your browser as they are essential for the working of basic functionalities of the website. We also use third-party cookies that help us analyze and understand how you use this website. These cookies will be stored in your browser only with your consent. You also have the option to opt-out of these cookies. But opting out of some of these cookies may affect your browsing experience.
Necessary Always Enabled

Any cookies that may not be particularly necessary for the website to function and is used specifically to collect user personal data via analytics, ads, other embedded contents are termed as non-necessary cookies. It is mandatory to procure user consent prior to running these cookies on your website.