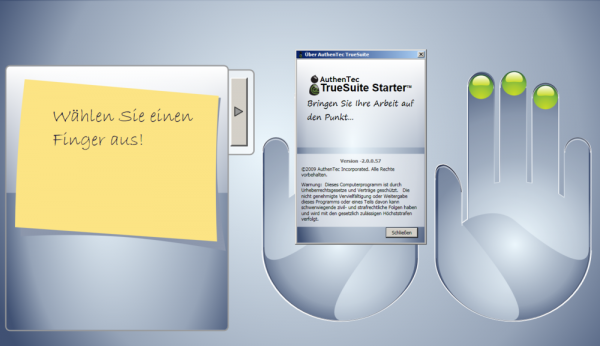 The setup process in Win7 to register ur fingers with the fingerprint reader: simple, but still confusing with a slice of comic sans Bradly Hand ITC.

This has to be the worst GUI in Windows 7. I sometimes wish they would spy on Apple products, or that it takes a company like Apple to redesign this. I’d even pay them extra if they could only redesign this process. Hell, even a command line interface is more plausible and straight forward.

I cheated this system by using different fingers for the same finger position and the system didn’t complain. WTF?

Win7 isn’t bad, but it still has some serious issues that urgently need to be fixed (hello SP1?). I switched from 32 to 64bit today because my Linux Minut is seemingly faster in 64bit (machine came shipped with 4 GB of RAM), so I organised a 64bit ISO of Win7 (the official ISOs are available online, directly from the official distributor) and used the same key which obviously works on both versions (makes sense, but then: what makes sense in the Windows universe?).

Coming back to the fingerprint reader GUI: would you trust this setup process? There isn’t much visual/acustic feedback on a successful registration of fingers. You actually never know when the system “is done”. That’s why I call this a Faildows, instead of Windows.